Got one cat bullying another? Does it keep stealing your other cat’s lunch money? Or calling them a loser? Or flushing their head down the toilet?

Probably not, but there are lots of genuine ways a cat might bully another cat. And while there are likely some genuine reasons they’re doing it, it’s probably disturbing and upsetting your other cat.

In this article, we’ve considered why this might be happening, what it means, and what you can do to stop it. We’ll give you all the tools you need to stop that furry little tyrant from dominating your home.

How Do I Know if My Cat Is Bullying My Other Cat?

Firstly, it’s important to make a solid distinction between rough play and actual bullying. If your alpha cat is doing a few of the following, they’re likely bullying rather than playing:

Not only is this type of scared, submissive behavior a worrying sign, but your bully cat will be able to recognize it. And if your bully cat recognizes it, it will take advantage of it, and further assert itself. So if you see any of this behavior, you need to stop the bullying behavior as soon as you can.

If you’re not sure what your cat’s body language is telling you, it’s a good idea to study it a little.

As a general rule, if your cats take turns being the aggressor when they play, there’s probably not a problem. If they don’t take turns, and one cat is pretty much always the aggressor, it’s likely that the aggressive cat is bullying the other.

Why Do Cats Bully Other Cats?

If one of your cats is bullying another, it’s not just because they’re a jerk. Bullying have have its roots in a lot of reasons:

It’s possible that any of these factors (or a combination of them) might be the cause of any bullying. Even if it’s something you can’t spot, there’s usually a reason why the bullying begins.

How Do I Stop Cat Bullying?

No matter the reason and no matter how it’s displayed, it’s essential you stop bullying before it becomes a real problem. There are several ways you can do this.

Lots of bullying and fighting can start because of a lack of space. Less space means less territory, which means more territorialism.

Every cat (no matter how many you have) should have its own food bowl, water bowl and litter tray. Some specialists even recommend having one litter tray per cat, plus one extra litter tray.

If your cats have climbing, scratching, perching and playing spaces, they should, again, have one each of these per cat.You should also consider having separate toys for separate cats, but this is less important.

If you see one cat bullying another for food, water or space, having separate spaces and territories is usually the best solution. This might be a little inconvenient and expensive, but it’ll completely remove any competition for space, and things might well go back to normal.

You should also make your home a peaceful space. You can do this by reducing all stressors and loud noises, and by closing your drapes at night.

Distract Them Instead of Rewarding Bullying

Like with a naughty kid, it’s easy to stop bad cat behavior by giving the bully cat a treat or some food. But this is just reinforcing the behavior, and though it makes things easier short-term, it’ll make them much harder long-term.

Like all behavior, bullying is habitual, and if you can break the habit, there’s a good chance you can stop the behavior.

If fights are common, break them up as soon as you can. But do it carefully and subtly. Don’t get physically involved. If you do, you might end up getting hurt, or you might become your bully cat’s new nemesis. Instead, stay out of sight and bang a pot, clap your hands, or make some other similarly-loud noise. This way, you’ll stop the cats from fighting without being ‘involved’ in the fight.

Keep an Eye on Them

If you have lots of cats, this one can be quite complicated. But if you have only one bully cat and one victim cat, this can work pretty well.

Keep the two cats separated at all times, apart from designated meetings when you can monitor exactly what’s happening. During these meetings, ensure the cats have to stay in one designated place together, by closing all doors, or keeping them in cat carriers or on leashes. This process is like a reintroduction, and you should treat it just as if you’re introducing a new cat to your home.

The vast majority of feline bullying behavior occurs between same-sex cats. And it’s normally worse during mating season. Neutering your cats at any time can massively reduce their urge to bully and fight, but you should neuter them before the age of one for best results.

Lots of people wrongly believe that neutering cats is cruel. But it can actually be beneficial, for lots of reasons.

Speak to a Veterinary Behaviorist

This is a last resort, since it’s drastic and likely very expensive. But sometimes, the last resort is the only thing that’ll work. If you’ve already tried everything else, consider talking to a veterinary behaviorist, who’ll be able to recommend bespoke solutions, and maybe even advise some medications.

If you do decide to see a veterinary behaviorist, make sure they’re certified, recommended and trusted.

What Can I Use to Stop My Cat From Bullying?

Though behavioral modification is the real solution to cat bullying, there are a few things you can buy to help ease things along.

How Do I Stop My Cat From Bullying My New Cat? 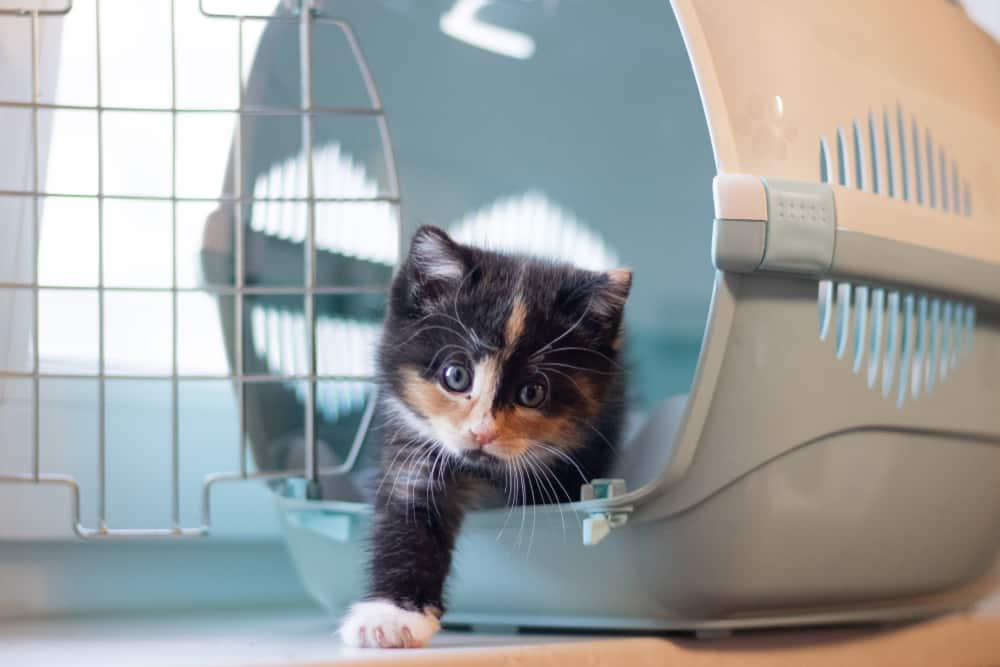 If you already have a cat and you’re about to buy a new one, your existing cat will likely feel that their life is being compromised. They’ll feel they’re losing space, power, territory and respect. In order to avoid the potential fights and bullying caused by this problem, introduce your new cat intelligently and incrementally.

Here are some things you should do:

But it’s very likely that these techniques, habits and products will work eventually. Over time, if you use the right tactics and tricks, you’ll be able to stop your cat from bullying your other cat. No more bullying, no more fighting and no more frantic Googling.

How to Show Your Cat You Love Them

How to Calm Down Your Hyper Cat

How to Sedate a Cat for Travel

How to Bandage a Cat’s Paw: First-Aid for Cats