Cats love to keep us guessing with their strange and mysterious behavior. From everyday habits like arching their backs and kneading us with their paws to downright bizarre activities such as ‘ghost hunting’ and being scared of zucchinis — our feline friends seem to relish our confusion.

As cute as the curiosity surrounding our kitties is, by nature we humans can’t help but seek out explanations. Fear not, as we are here to give you the answer to mankind’s most puzzling pussycat problem yet: Why do cats arch their back?

In this ultimate guide, we’ll get straight to the point and begin by listing the 5 simple reasons why a cat will arch its back, what this body language means, and the science behind it.

Once you understand exactly why cats arch their backs, we’ll take you on a journey through our ancient fascination with this phenomenon — discovering the spooky Celtic mythology that made this image iconic.

Finally, we will explore how this eye-catching activity has inspired our art, literature, traditions and even influenced the way we keep fit. We highly recommend reading this article with your cat.

5 Reasons a Cat Arches Its Back

When a cat is happy and relaxed, it often stretches its back into an arch. Since they can’t speak any human language, cats have found plenty of other ways to communicate with us through body language.

When your cat arches its back, particularly when you are cuddling or enjoying each other’s company, it wants you to know that it is happy, comfortable, and feels safe around you.

It’s easy to tell when a cat arches its back from happiness as it will often accompany the arching with purring, rubbing up against you, head-butting you, squinting its eyes in a smile, sitting beside you, or generally behaving in a relaxed manner.

Much like us, cats have a sense of humor and sometimes they like to mess around. Play fighting and pouncing is not only a lot of fun for your kitty but also a great way to release pent up energy and practice for the day they finally get to join a pride of lions in the wild.

To prepare their bodies for a devastating leap upon their prey, our fluffy friends often contract their bodies into an arched position to gather more power behind their pounce. But you don’t need to worry that your cat is looking at you as dinner; just as children (and sometimes adults) like to play-wrestle with their friends, kittens (and sometimes fully-grown cats) also like to play-wrestle with their friends (that’s you). We recommend playing along.

The only time you need to worry about this behavior is when it is accompanied by hissing, growling, or raised hackles (fur standing on end), as this can mean they are in a bad mood and doing it out of anger (see below).

3. They Need to Stretch

Stretching not only feels great but also serves the necessary function of relieving built-up fluids and tension in your cat’s body. Even if they typically spend all day laying around the house, your cat’s body was originally designed for hunting prey and quick escape from predators.

A cat’s spinal column is longer and way more flexible than even the most athletic human (see below for the fascinating science and how this has influenced the way we keep fit). So, they need to take good care of their back by stretching it as much as possible and from all angles.

Arching its back is just one of the ways a cat keeps its spine strong, healthy, and ready for action. It’s completely normal to see your cat arching its back to stretch it out after a long nap, exercise, petting, or play.

An important time to pay attention to your cat arching its back is when you notice that your cat seems aggressive. A cat will often signal its anger by hissing, spitting, growing, scratching, raising its hackles, glaring at the object of its anger, and arching its back.

When your cat arches its back from anger, don’t ignore it. This can indicate that you are behaving in a way that makes your cat feel disrespected (pulling its tail, throwing it around, hurting it), and even if you haven’t done it on purpose, it’s important to listen to your cat’s feelings.

Even if you think you are playing nicely, make sure you take into account your cat’s reactions and behave in a way that makes it feel comfortable. Sometimes, rescue cats can become angry over really small things, but this is often due to cruel treatment by their past owner and can usually be healed over time through compassionate care.

If your cat arches its back angrily at what appears to be nothing, be sure to stand near your kitty and take a careful look around (particularly when outside). Your cat has highly tuned senses and can often see or smell a threat that you are not aware of. Your cat’s anger may even be an attempt to protect you from danger.

When your cat arches in fear, it is a similar scenario to when it arches from anger. Your cat will generally react in the same way and for the same reasons. Refer to the section above for how to recognize when your cat is arching its back from fear and what to do in that situation. 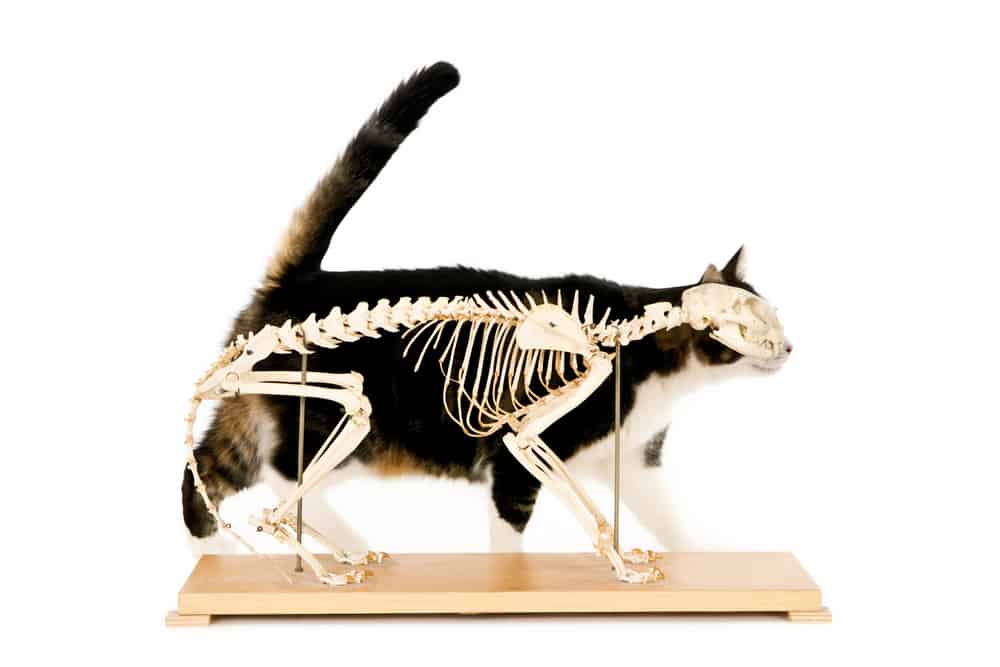 The Science Behind a Cat Arching Its Back

You may have noticed that a high arch isn’t the only strange position a cat can get into. We regularly observe our feline companions forming themselves into all kinds of seemingly impossible shapes. If you don’t believe us — just take a look at some of the hilarious photos from faux-conspiracy internet trend ‘Cats Are Liquid.’

Without a doubt, cats are one of nature’s top contortionists and this is all down to their super flexibility. The average cat’s spine has as many as 50 vertebrae, while the human body has a spine consisting of only 30 vertebrae.

These extra bones extend all the way down a cat’s tail and give them the incredible ability to pull off such feats as arching their backs, fitting into weirdly shaped spaces (ever seen the popular meme “If I fits, I sits?”), taking cat naps in completely abstract positions and, famously, flipping their whole body in mid-air to land safely on their feet.

Interestingly, there’s one breed of cat which misses out on the extra spinal bones. Manx cats carry a unique genetic mutation that means they are born with no tail whatsoever. This gives them less (and shorter) vertebrae than regular cats but also surprisingly makes them the champions of arching as every Manx cat is also born with a permanently arched back.

How Cats Arching Their Backs Has Helped Humans Stretch

Joseph Pilates (creator of popular workout ‘Pilates’) based many of his exercises on the way a cat stretches. There’s even a myth that his entire exercise regime was based on his observation of the movement of animals. Nor would the traditional Indian flexibility exercise regime ‘yoga’ be complete without its own take on the cat’s fabulous contortions. Morning yoga wouldn’t be the same without the popular stretch ‘Cat Position.’ 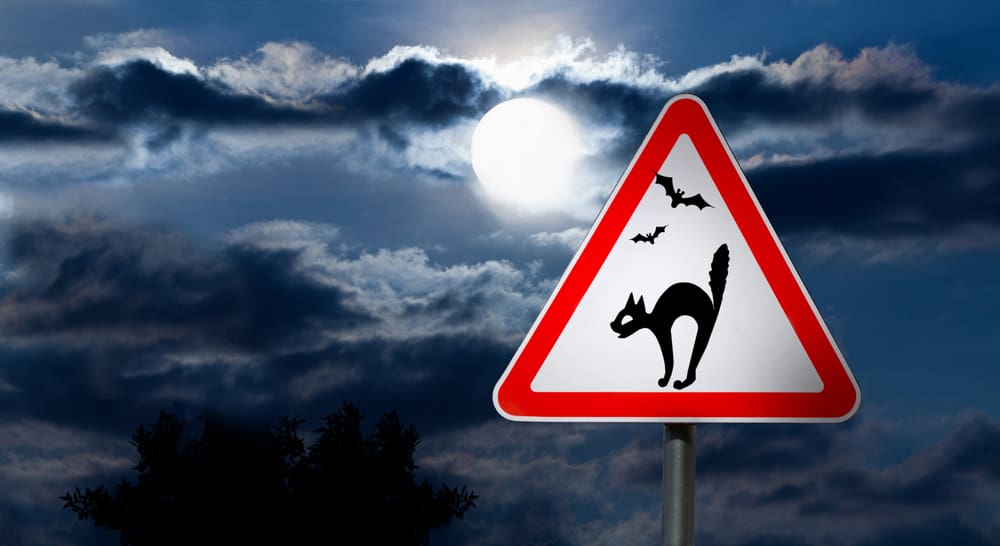 One of the most iconic images of a cat with an arched back is the black silhouette we often see pictured atop a witch’s broom, beside bats and pumpkins, or set against a full moon — the arching cat is typically depicted in spooky scenarios. But did you know that this popular image actually originates from Celtic Mythology?

Ancient legend speaks of a feline fairy-monster named ‘Cat Sith’ who stalked the Scottish highlands, stealing the souls of the recently deceased. Cat Sith was described as being jet black with a white spot on its chest and was typically spotted in a furious stance with its back arched and fur standing on end.

Today’s ‘Halloween’ was once known as ‘Samhain’ and was one of the most important celebrations in the Celtic calendar. The reason we decorate our houses on Halloween with the silhouette of a black cat arching his back is actually thanks to Cat Sith and the very special role it played on this day.

Much as we leave a plate of cookies out for Santa on Christmas, the Celts left out a saucer of milk for Cat Sith on Samhain. In doing so, they believed their house would be blessed by Cat Sith, while the households that forgot would be cursed with their cow’s milk drying up.

This dog-sized kitty specter also made an appearance in neighboring Irish folklore. However, here it played the role of a shape-shifting witch. A witch with such great power that she could shapeshift nine times into Cat Sith before getting stuck as a cat forever. This is likely the origin of the belief that cats have nine lives.

How Cats Arching Their Backs Inspired Our Art

A cat arching its back is an undeniably magnificent sight that never fails to capture our attention. The beauty of the lines and curves formed by our feline gymnasts has certainly not been missed by the keen eyes of artists who strive to recreate it.

Pierre Bonnard created a truly surreal version of an arching cat in ‘The White Cat,’ while Jean Simeon Chardin’s composition ‘The Ray,’ which lives at the Louvre, features an angrily arching kitten. Even Picasso took a turn at painting this spectacle in his piece ‘Cat and Lobster,’ which is housed in the Guggenheim.

From Japanese virtuoso Utagawa Kuniyoshi to Soviet master Vadim Trofimov and from Roman mosaics, to popular children’s book ‘Meg and Mog’ — this striking image has been immortalized by many famous painters and creators throughout history.

One of our favorite examples of arching cat art can be found in an even more spectacular location than those fancy museums we just mentioned. At the tippy-top of the highest turrets, two perfectly carved arching cat sculptures watch over the city of Riga, Latvia from the roof of the Art Nouveau ‘Cat House’.

These iconic cats have become a symbol of the city and it’s no wonder with the hilarious legends associated with them. The central theme of the legend is that the owner of the building had issues with a ‘Great Guild’ to which he was denied membership. In a historical version of giving them the middle finger, he erected the sculptures of two angry cats on his roof, with their fluffy bottoms pointed directly towards the Great Guild.

When the argument was finally resolved, the cats remained, but their exposed buttocks were reportedly turned in another direction.

A Cat Arching Its Back Is a Magical Moment

The long list of artists, writers, fitness instructors, legends, and traditions that were inspired by cats arching their back only serves to prove what a tremendous effect this image has had on the human psyche.

So, next time your kitty pulls this power move, take a moment to appreciate just how special it really is.

How Much Should You Feed a Kitten?

How to Stop Your Cat From Overgrooming

The 8 Best Electric Shavers for Cats in 2022