Shakespeare famously said that “A rose by any other name would smell as sweet,” but let’s be honest — names usually tend to reflect the character of their owner very well. And if you have the opportunity to bestow a name upon someone, then you might as well choose a name which suits them down to the ground.

If you’ve got a psychic cat who appears to possess supreme powers, a kitty who doesn’t like to waste her time with mere mortals, or a feline who gracefully bestows her noble presence upon you only to demand you worship her with pats — you’ll find the perfect name for her on our list of divine goddess cat names from around the world. 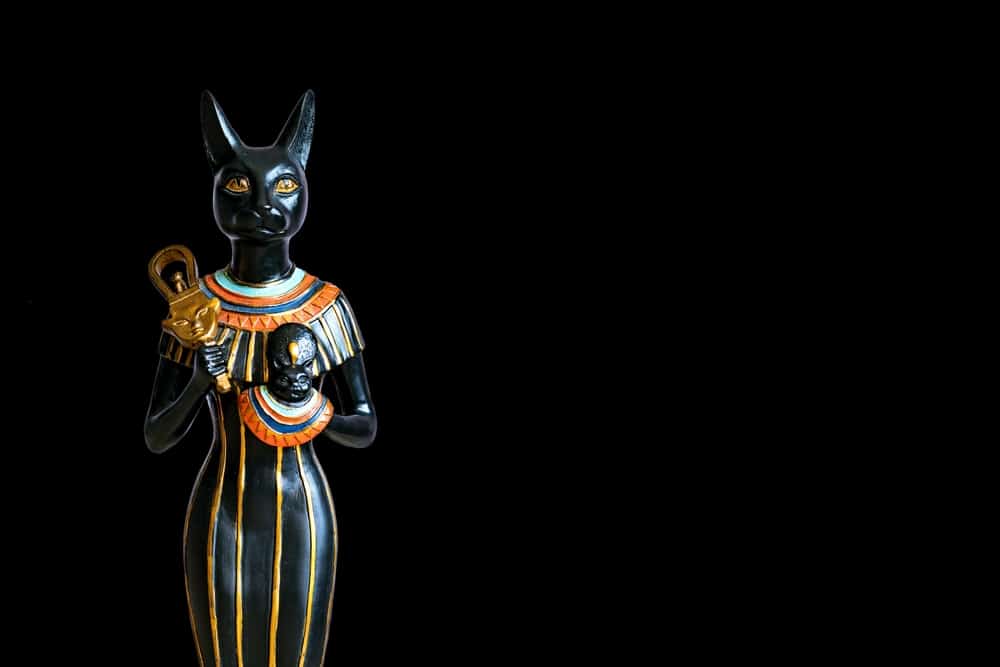 Who better to name your cat after than a goddess who famously loves felines?

Greek goddess of the hunt and all things wild. Artemis had the power to shapeshift into the form of a cat.

A fierce and adventurous Greek warrior Goddess who was transformed into a lion as punishment for making love in a shrine.

This Egyptian deity was depicted with the glorious head of a cat upon a human body. Goddess of cats and domestic women’s things.

This Irish moon goddess is always guarded by her faithful white cats. She is the goddess of magic, arts, sciences, and keeper of the cauldron of knowledge.

Riding upon a lion’s back, the Hindu goddess Durga (lit. one who alleviates suffering) fights evil demons.

This gutsy goddess of Norse mythology rides in a carriage drawn by two magic cats. A powerful sorceress who rules over love, witchcraft, and death.

An absolute icon to modern witches. This Greek goddess can shapeshift into a cat and rules over all things dark, magical and mysterious.

An elderly jaguar goddess who loves sweat baths. This ancient Mayan is known as “Our Grandmother the Nocturnal Physician.”

A Hindu goddess with the head of a lion. She’s so powerful in her timeless shakti creative force that when she shakes her lion’s mane, she scatters the stars.

This Hindu fertility goddess rides her lion across the sky, keeping the divine balance in her courts of love and marriage, beauty and harmony, children and devotion.

Pakhet is an Egyptian lioness (or panther) goddess of war whose name literally means “one who scratches.” 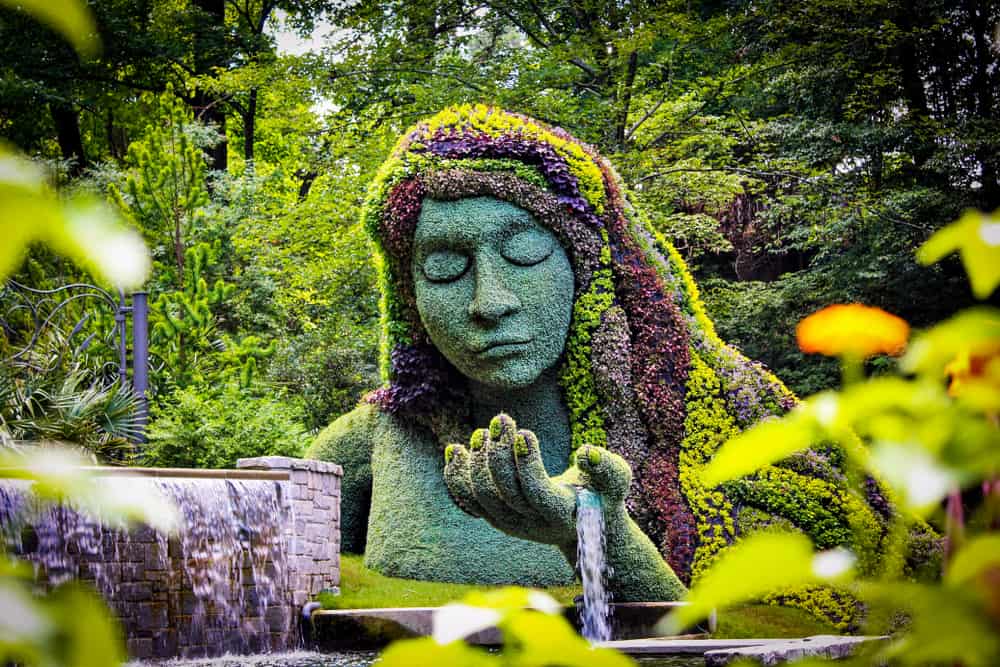 Goddess Cat Names From Around the World

Does your cat house the mossy spirit of an ancient Celtic goddess?

Aine, meaning “bright,” is the Irish Goddess of love and light.

A Welsh goddess of fertility and rebirth who turned the wheel of life and wove the threads of fate.

An Irish warrior goddess who ruled over life and death along with wisdom and inspiration.

This Welsh goddess was literally created from flowers.

A brave and determined Celtic sun goddess who did great deeds to win her soulmate.

If your cat loves pickles and vodka, she might be a Slavic Goddess incarnate.

A joyful earth mother goddess who brings balance and harmony to the land.

A fertility Goddess associated with springtime and the birth of all living things.

This powerful rain goddess is the wife of Slavic Odin: Perun, god of thunder.

A summer solstice goddess of ritual, celebration, fire, and water.

If your cat’s always wearing white robes, you might need to name her after a Greek goddess.

With her name literally meaning “goddess,” Theia is a mother of gods who rules over eyesight and the skies.

Shadowy mother of darkness, night time, and fearsome sons such as Thanatos (death) and Hypnos (sleep).

Queen of the Underworld.

A goddess of peace with a bountiful and generous nature. 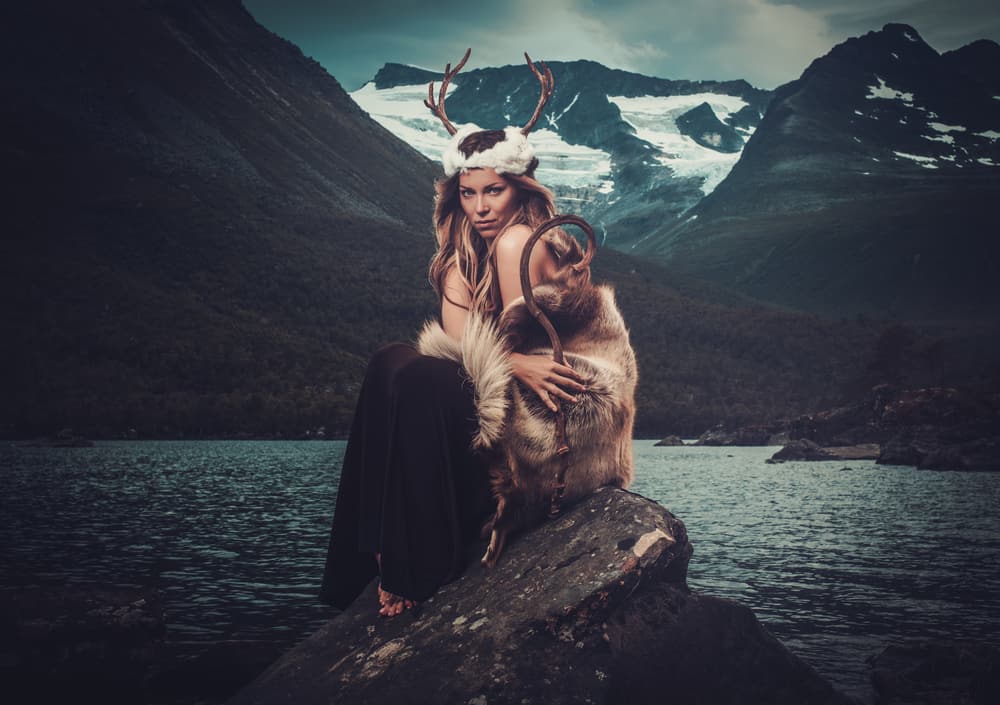 You’ll know your cat is a Nordic Goddess when she scratches runes into your furniture.

A Queen of the elves who rules over the future with her incredible magic powers.

A goddess oracle who gains wisdom from trance, consulted by the gods.

Goddess of the hunt. Teacher of spinning to young women and an initiator of men.

A goddess of springtime who is celebrated on Spring Equinox, an ancient pagan precursor to Easter

Goddess of springtime (“she who renews”). She nurtures the tender youth of the world.

Ruler of the Nordic underworld, in her name lies the origin of our modern word for “hell.”

If your cat always steals your pizza, she’s definitely a Roman goddess.

Daughter of titans, this goddess (Eos in Greek mythology) is the embodiment of dawn itself.

An earth and mother goddess who watched over crops and the harvest, along with the full cycle of life.

A famous sower of “discord,” this naughty daughter of night helped to start the Trojan war.

Female personification of the planet Jupiter, this goddess rules over fertility and marriage and wields eternal life force.

Personification of the planet Venus, this galactic deity is also known as Aphrodite in Greek mythology and is famed for her sensuality and beauty.

Moon goddess supreme, Luna wades the passive cycles of life as tides in the ocean.

This feisty goddess of war likes to relax with handicrafts and arts in her time away from battle.

If your cat unrolls the toilet paper, she might be an Egyptian goddess trying to mummify herself.

Powerful sorceress and mistress of death, she deals in decomposition.

This springtime goddess maintains the eternal cycles of renewal.

A destructor goddess of war, Sekhmet also protects in the more subtle war against illness.

A mathematically-minded goddess with a penchant for scribing and librarian records. Rules over history, accounting, astronomy, and architecture. 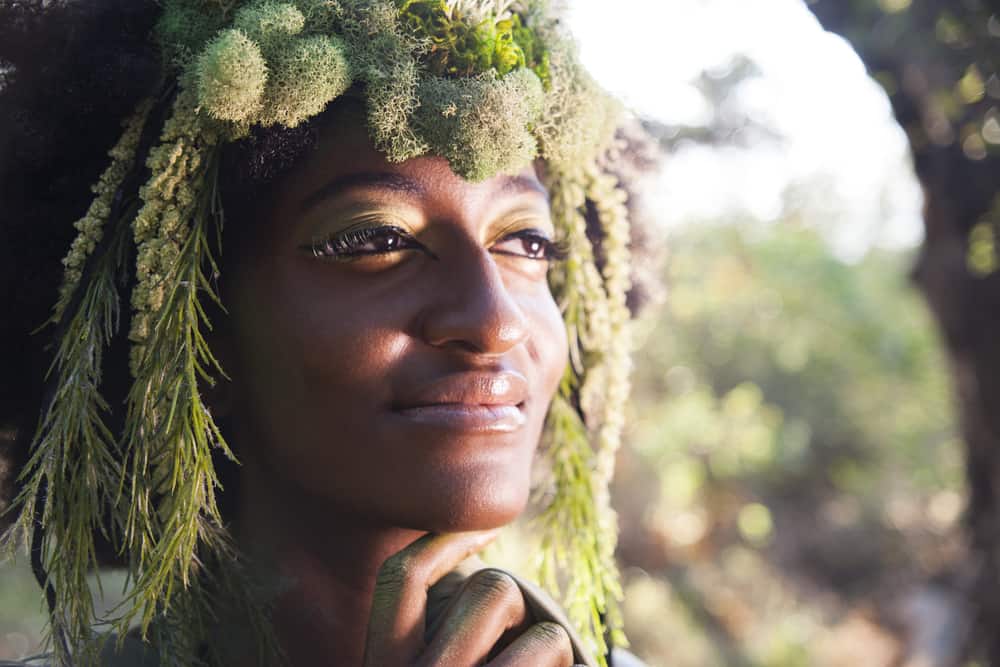 Central goddess to the Berbers, Phoenicians, and Pune. Wife of sacrifice-loving-deity, Baal.

A Goddess of the Dahomey culture, married to the son of a sea god and mother earth.

A Dahomey Goddess of the moon, mother of the stars.

The most revered of Guanche Goddesses, she was known as the sun mother.

Ever seen your cat building ships? She might be a Phoenician Goddess.

A holy and sensual goddess who celebrated all things sexual and fertile.

“The Mother of the Gods.” Embodiment of the planet Venus.

Fertility goddess who rules over childbirth, love, and the sacred myrrh tree.

When your cat acts like a little alien who’s the origin of all known religion, she’s probably a Sumerian goddess.

Goddess of healing and stars who rules over medicine.

Goddess of spring known as the morning star, precursor to Easter.

Goddess of astrology and learning.

A mother goddess and consort to Marduk. 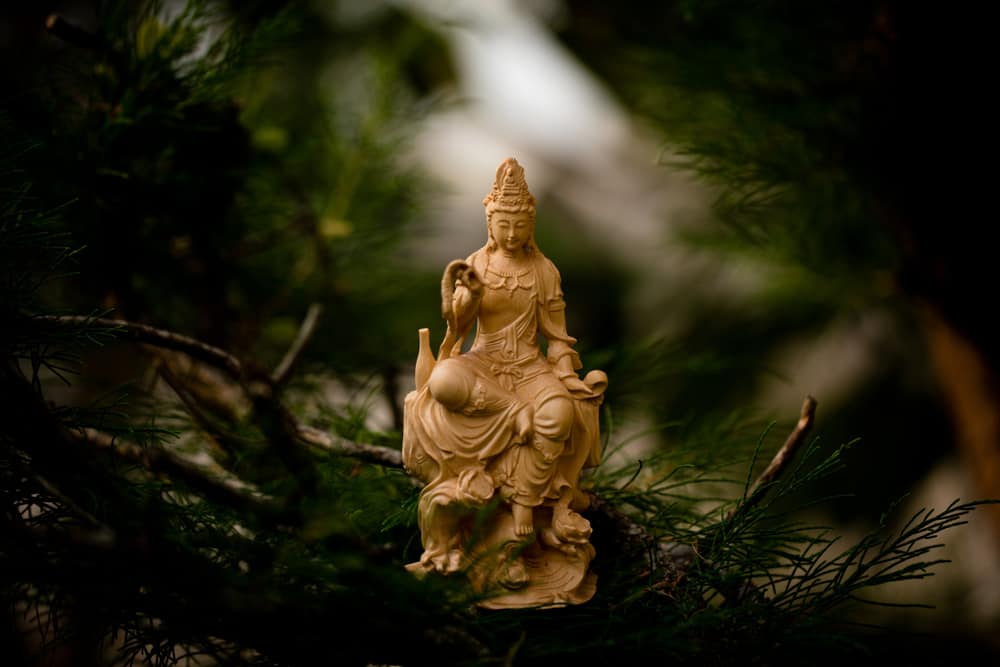 If your cat uses her litter tray as a zen garden, she might be a Japanese goddess.

Free-roaming goddess of the open plains.

Princess-goddess of delicate flowers and booming volcanoes, including Mt. Fuji.

If your cat starts giving you acupuncture with her claws, she might be a Chinese goddess.

Fertility goddess and feminist icon who grows magical peaches that make you immortal.

Primordial creator goddess who created the first humans from clay and taught them how to live on earth.

You know your cat’s a Tibetan goddess if she climbs to the top of everything to sit and meditate.

Goddess of tantric yoga, a three-eyed sorceress of psychic and occult powers.

A compassionate central Mother Goddess with her own sacred mountain.

Female embodiment of the Buddha, goddess of transcendental meditation. 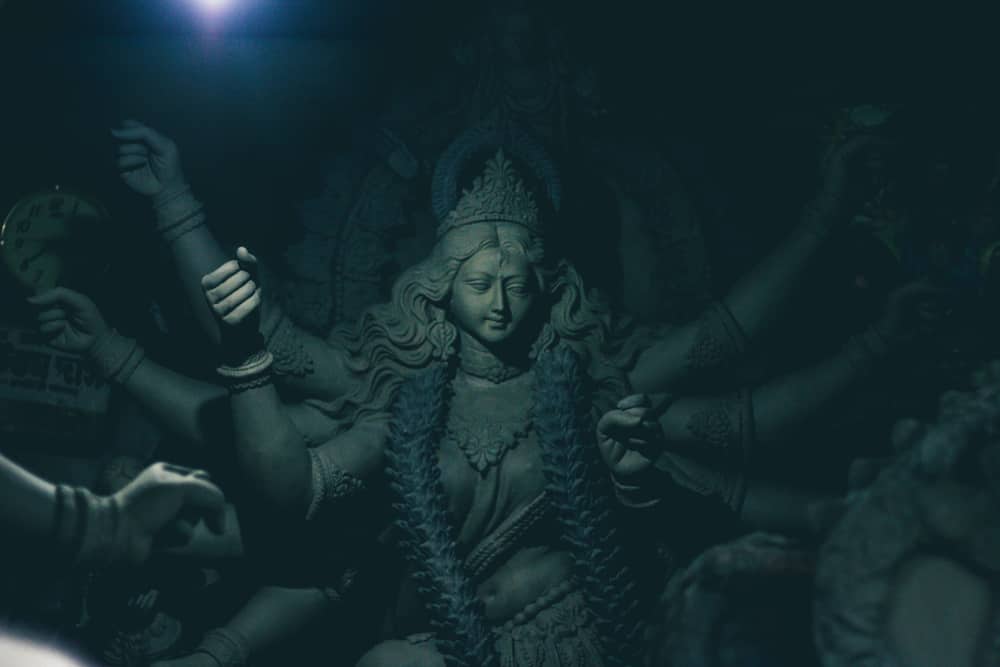 Does your cat love doing yoga stretches? She might be a Hindu goddess.

An egg-laying mother Goddess who predates the beginning of time.

Nature goddess who cares for the forest and its animals.

Goddess of chaos and death who assists us in growing through pain.

Generous goddess of light and abundance in all aspects of life.

Mother of trickery and illusion who distracts us from truth.

Goddess of the night.

The beautiful Goddess of the clouds and the dawn, married to sun god Surya.

Goddess of science, wisdom, and all things artistic.

You know your cat’s a Hawaiian goddess when she prefers poke to tinned tuna.

Goddess of fire and lightning, volcanoes, and destructive force.

Sorceress with a flying vagina who rules over black magic and herbal medicine.

Musical goddess of forests and fertility, love and hula.

If your cat runs around like she’s been chewing on coca leaves, she might just be an Inca Goddess.

Earth mother goddess whose name means ‘our mother in space and time’.

Protector of young women, goddess of Venus, and ruler of dawn and twilight.

Mother of the coca plant, she is a sexually active goddess of joy and health.

Moon goddess and protector of women who rules time with the calendar.