The Pitbull dog breed is no stranger to infamy. Often cast in a negative light by the media and other news outlets, what most people recognize as a Pitbull may not even be a Pitbull. Many other dogs exhibit the trademark look of a Pitbull and the breeds are easily confused; the term “Pitbull” doesn’t refer to a specific breed of dog, it instead refers to several ‘bull’ breed types of dog.

There are only four breeds that are typically classified as Pitbull breeds. In this article, we will be discussing the origins of the Pitbull, the different types of Pitbull dog breeds, and addressing the controversy that surrounds these loyal pups.

The Pitbull dog breed originated in England around the 19th century. A cross between Old English Bulldogs and Old English Terriers, the Pitbull was originally bred to participate in the blood sports of dogfighting and bull- and bear-baiting. As the sport grew in popularity in America, Pitbull dogs were brought overseas. However, in 1874, laws began outlawing dog fighting across the states, with a total federal ban in place by 2007.

In the 20th century, Pitbulls began to be accepted into the American home, often regarded as “nanny dogs” – a type of dog that is patient with children – due to their calm and cheerful nature. They became working dogs and began earning a positive reputation around the American household.

So why are they regarded with such fear today? The answer lies in the fact that illegal dog fighting rings grew in popularity again in the 1980s, with Pitbulls being the breed of choice in the activity. Combined with media attention, this gained Pitbulls a reputation as a vicious, quick to attack, potentially dangerous dog breed. Public approval of the breed dropped, landing the Pitbull dog into a place of controversy.

There are four main categories of Pitbull that are recognized today. These dogs are all mixes of bulldogs and terriers that land them firmly under the umbrella of ‘Pitbull-type’ dogs. While they share some characteristics, each dog does possess their own unique traits. 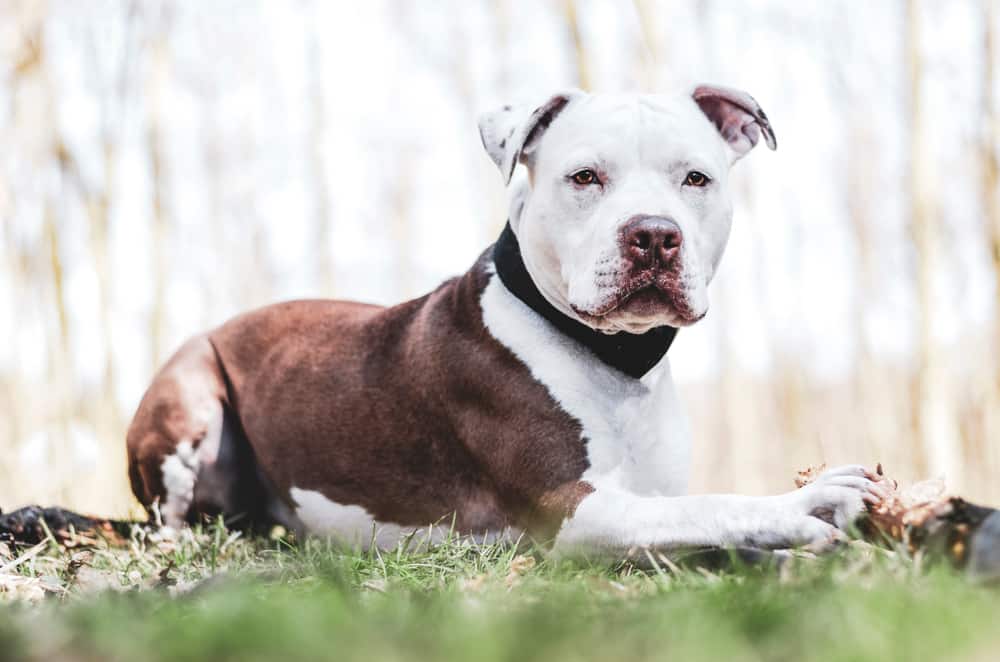 The American Pitbull Terrier is probably the most commonly thought of dog when people refer to a “Pitbull.” They are not recognized as an official breed by the American Kennel Club, but they are considered a purebred dog by the United Kennel Club. This breed has been around for at least 150 years.

This type of dog is taller than the other categories of Pitbull. They are more athletic in appearance and are very hardworking and obedient. They make wonderful working dogs and thrive given the chance to prove themselves.

American Pitbull Terriers come in a variety of colors, including brindle, black, brown, white, or a mix of these colors. They stand between 17 and 20 inches tall and weigh between 30 and 60 pounds, depending on gender and size.

This type of Pitbull is genetically predisposed to knee problems, hip dysplasia, and allergies. They can often be confused with the Dogo Argentino or the American Staffordshire Terrier due to their similar face shape and size.

The Rednose has additional health concerns associated with it due to being a product of recessive genes. This dog has a higher price tag when purchased from a breeder and can often be a target of unethical breeders who try to breed genetically close (family member) Rednose dogs to increase the chances of a Rednose puppy. This practice results in genetic defects and poor health, and should be avoided.

Similar to the Rednose, the Bluenose American Pitbull Terrier is also a product of recessive genes. This type of dog will have a blue or grey nose, eyes, lips, toenails, and coat. This coloring is a sign of decreased melanin which can lead to increased risk for heart diseases or skin allergies. 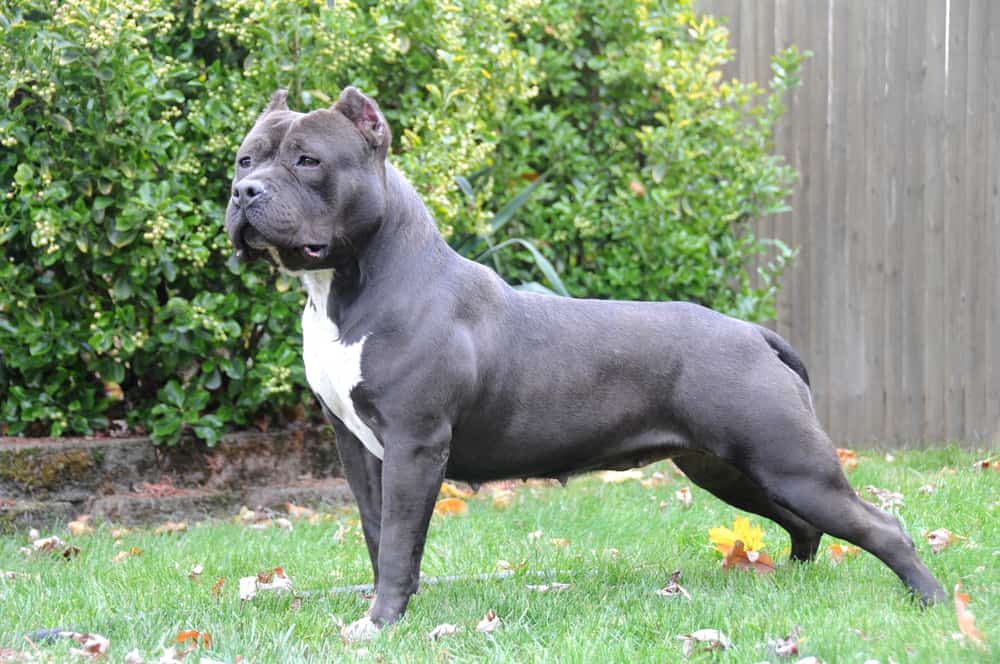 Like the American Pitbull Terrier, the American Bully is recognized as a breed by the United Kennel Club, but not the American Kennel Club. A newer breed that originated around the 1980s, this dog can appear in four distinct sizes – pocket, standard, classic, and XL.

The American Bully is typically much shorter than the other types of Pitbulls and stands between 13 and 20 inches depending on the size classification. They weigh between 65 and 85 pounds and can appear in black, white, blue, brindle, or brown. Due to their shorter stature and larger width, this dog appears stocky and muscular, but, despite their appearance, they are gentle and very affectionate.

Like other Pitbull type dogs, the American Bully is predisposed to hip dysplasia and allergies. They also require specialized nutrition due to their size. 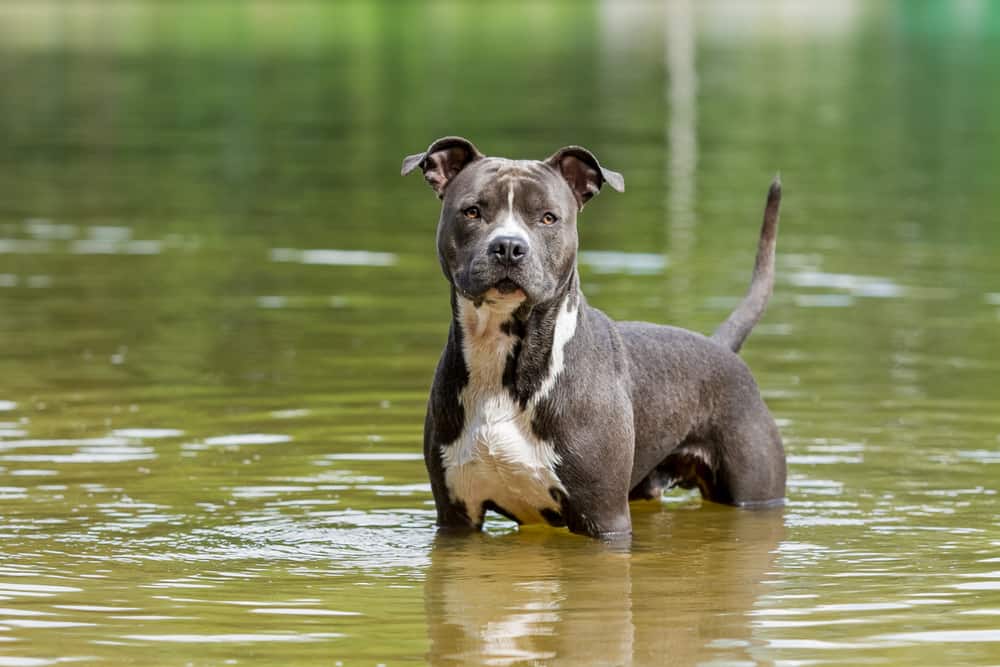 Also known as an “AmStaff,” the American Staffordshire Terrier is recognized by the American Kennel Club, but not by the United Kennel Club. This breed is continually voted as one of America’s favorite dogs and has been a partner to 3 different American presidents. The most decorated war dog of World War I, Sergeant Stubby, was an AmStaff.

This dog is very loving to their family and is sweet in temperament. They stand approximately 17 to 19 inches tall and weigh between 50 and 80 pounds. They can appear in a variety of colors including black, brown, and red; they may have brindle patterns or white markings.

The American Staffordshire Terrier is also predisposed to knee injuries.

Recognized as a breed by both the American Kennel Club and the United Kennel Club, the Staffordshire Bull Terrier is the smallest of the standard Pitbull types. This dog stands between 14 and 16 inches and weighs between 24 and 38 pounds. They appear primarily in the colors of black, blue, brown, and white.

The Staffordshire Bull Terrier is regarded as clever and brave. They are loyal to their families and are constantly showing affection, but they may develop separation anxiety. They are predisposed to the typical Pitbull genetic conditions of hip and knee issues, allergies, and cataracts.

In addition to the commonly known Pitbull pure-breeds, there are a couple of Pitbull mixes that are gaining popularity in recent years.

The Husky-Pitbull mix is a high energy, intelligent dog. They require a lot of attention and exercise to keep them from acting out around the house. However, like Pitbulls, they are affectionate and strong.

Often regarded as dangerous due to their appearance, the Rottweiler-Pitbull Mix is actually quite friendly. They are sociable but do need to be properly trained in order to keep their prey drive to a minimum. This breed is very intelligent, and is a good candidate be trained with a whistle-training method.

Where to Adopt a Pitbull-Type Dog

You can adopt a Pitbull from several places. Each method of adoption has its own pros and cons.

One of the least expensive and most ethical ways to get a Pitbull puppy or full-grown Pitbull is to seek one out at an animal shelter. This type of dog is typically the most euthanized due to public opinion about the dogs, so adopting one from a shelter is a great way to save a dog’s life. You can also find Pitbull mixes at shelters.

There are several organizations across the United States that exclusively rescue Pitbulls from kill shelters and bad life situations. These organizations are dedicated to the well-being of Pitbulls and work hard to match each dog they rescue with a caring home.

Adopting a dog from a rescue may cost a little more than a shelter, but the money you pay typically goes back towards helping rescue other dogs.

A higher cost option, you can purchase a dog from a breeder if you are looking for a specific pure-bred Pitbull. An American Pitbull Puppy will typically cost around $800 at a minimum, with different colorings and bloodlines increasing the price.

When shopping for a breeder, try to avoid puppy mills or backyard breeders. These are individuals who breed strictly for profit without consideration for any of their dogs’ health or living conditions. Thoroughly research the breeder you intended to purchase from to make sure they are legitimate.

Getting to Know Pitbulls

There are many conflicting stories and rumors circulating about Pitbulls today that may turn you away from the breed. Read on to find out the truth behind some of these misconceptions.

Pitbulls Are Dangerous by Nature

The most commonly believed myth about Pitbulls is that they are an inherently dangerous breed. However, this is far from the truth. On a test administered by the American Temperament Test Society, each type of Pitbull passed above the average score. This means that the dogs have a high temperament and are not prone to violence by nature. That being said, any energetic dog with high energy and high prey drive (Pitbulls included) can be difficult and cause trouble without proper training and exercise.

Along with being believed to be dangerous, many people regard Pitbulls as untrainable dogs. The belief is that these dogs are too violent to be trained properly. This belief has been proven wrong time and again by the number of working Pitbulls and well-trained dogs around today.

Keep in mind that training your Pitbull is a necessary step to ensuring their constant good behavior. Proper socialization and training will allow your dog to be the complete opposite of what most people expect a Pitbull to be.

Lockjaw is a condition in which when a dog bites down on something, their jaws lock and they are unable to let go. It may surprise you to find out that lockjaw doesn’t actually exist among dogs. The reason people think Pitbulls have lockjaw is due to their terrier heritage; terriers are known to grab onto prey while hunting, holding it firmly between their jaws. The jaws do not lock in place during this action, the dog is just unwilling to let its prey go.

You Shouldn’t Rescue a Pitbull

Many people believe that any type of Pitbull cannot be rescued due to it already being prone to aggression or violence as a result of abuse. This is, again, incorrect, as not all Pitbulls that are available for rescue have been mistreated, and even if a dog has been mistreated, it is unlikely they will become irreparably violent or aggressive as a result.

Dog aggression almost always results from poor socialization as a puppy, but it is a problem that can typically be remedied with proper care, training, and patience.

While dogs can’t literally smile to express happiness the way a human would, the happy face dogs show is fairly similar to a smile. This resemblance is even more uncanny in Pitbulls, whose wider faces give way to what appear to be broad grins.

All types of Pitbull dogs are often subject to breed-specific legislation. The common notion that Pitbulls are a dangerous breed has given way to increased restrictions on where you can live and take this type of dog. Many landlords ban Pitbulls from their property altogether, and some cities may not even allow Pitbulls to be owned within the city limits.

This breed-specific legislation is unfair to many Pitbull owners and lovers, but it is an important factor to keep in mind and research when you are considering bringing  Pitbull-type dogs into your family.

One of today’s most misunderstood breeds, each type of Pitbull dog is known for its high levels of affection and patience. The more each classification of Pitbull is understood, the closer society gets to appreciating that this is not an intrinsically dangerous dog breed. For many, Pitbull type dogs are beloved animals that truly deserve their spot as part of the family.