Hamsters make great pets. They’re quiet, easy to look after, and let’s face it: they’re downright adorable. They are literal fluffballs, and their little nose wriggles make you want to cuddle them for eternity. That’s not even considering the cute antics they get up to, from running marathons in their wheel to stuffing veggies in their cheek pouches.

If you’ve recently adopted a bundle of fluff, you’ll need a name that’s just as adorable as they are. Luckily, we’ve got you covered. From cute names inspired by food to ones inspired by their looks, you’re sure to find a name here that wins over your heart as much as your new furry friend has. 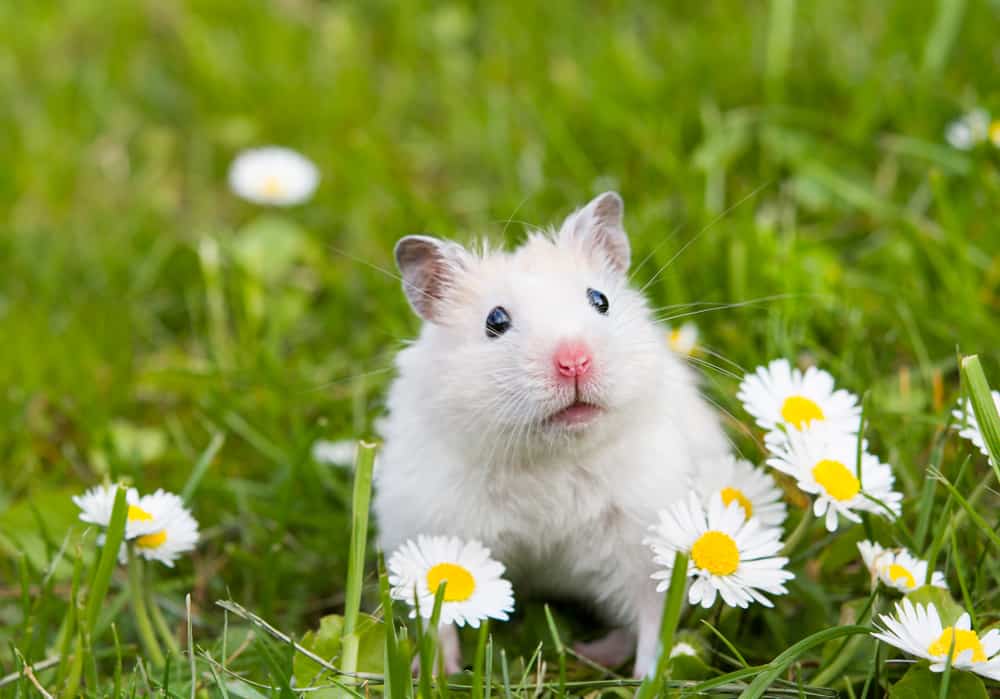 We’ll kick off with some names that have cutesy meanings. These names are all sweet-sounding and connote beauty, grace, happiness, or fluffiness. 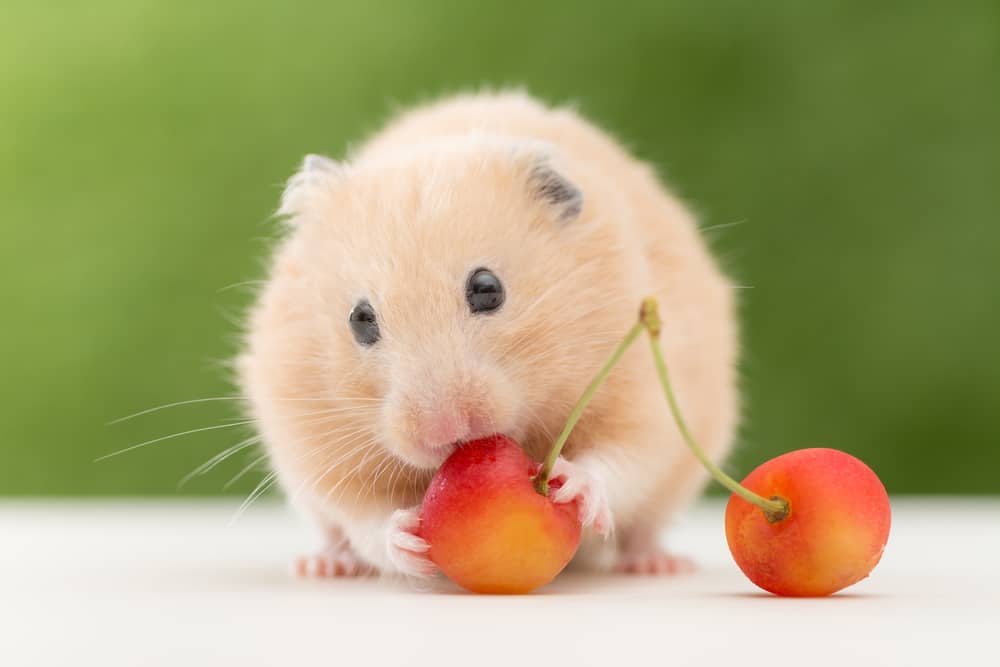 Hamsters are the foodies of the animal kingdom – they’re mukbangers in fuzzball form. They nom, nom and nom, while adorably stuffing it all into their cheeks. Sometimes, they stuff themselves so much their cheeks balloon to the point their head doubles in size. In fact, the name “hamster” itself comes from the German word “hamstern,” meaning “to hoard!” Honor your hamster’s foodie nature with these cute names inspired by all sorts of culinary delights. 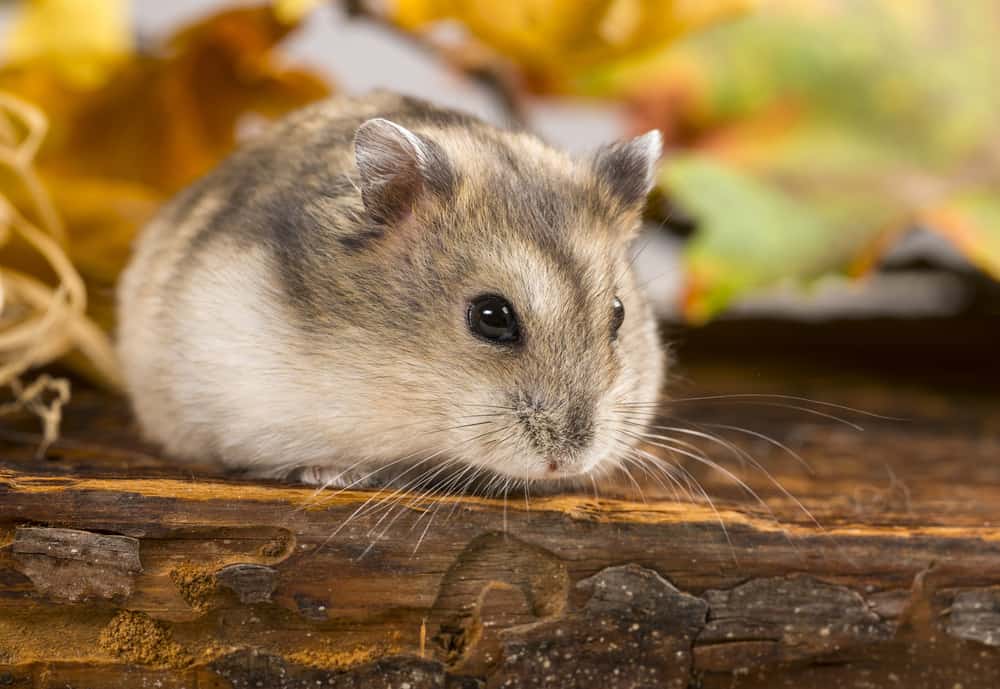 Brown, cream, gray, yellow – hamsters come in a wide array of colors, with many having fur made up of several hues. If you want a cute name that pays tribute to your furry friend’s striking looks, check out the names listed below.

Make sure to also browse the rest of our name lists as well, since many ideas we’ve suggested throughout this article can easily be associated with particular colors. For example, “waffles” is an apt name for a brown hamster, while “pearl” is perfect for a white fluffball. 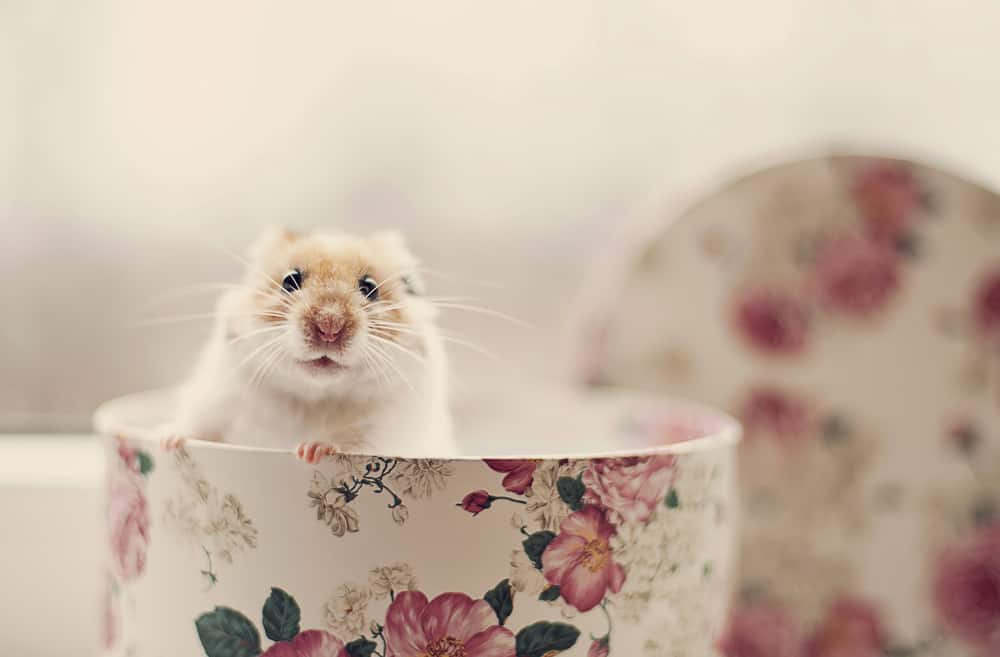 Next up, we’ll be looking at names that are as teeny as your furry friend. Every name here denotes “small” in some way or another. While we’re on the topic, here’s a fun fact for you: the smallest hamster species in the world is the Roborovski hamster, averaging a length of just 2 inches!

These names are fierce, powerful, and badass – a stark contrast to your hamster’s looks. While these names are technically not “cute” in their own right, once paired with your fuzzball we guarantee it’ll make your heart swoon; there’s nothing cuter (and more hilarious) than a hamster called “Chomps” nibbling away or “Xena” fiercely attacking a toy carrot!

As a side note, if you’re looking for a particularly hilarious hamster name, make sure to check out our dedicated funny hamster names list.

Finding the Right Moniker for Your Fluffball

Whether you want a cutesy food name for your fuzzball or an ironic name that plays on their cute size, our list is stuffed full of ideas that you’ll fall in love with and get inspired by. No longer will you have to feel like you’re running in a hamster wheel, spending hours and hours searching but getting nowhere!

An ideal name for your bundle of fluff is one that captures their personality, looks, or your own interests in some way; if your fluffball has a mighty personality, pay tribute to it with a name like “Bruiser” or “Hulk.” Despite common misconceptions, hamsters can learn their name and respond to it when called, so avoid anything overly complicated, as well as anything that can easily get confused with other words.

Once you’ve settled on a name, you can finally dedicate all your time to spiffing up your hamster’s hub. You’ll need comfy bedding, plenty of chew toys, and things for them to hide under. And, of course, no hamster’s home is complete without a wheel for them to run in! For further guidance on hamster care, click here.