In a galaxy far, far away, a troubled cat owner was looking for the ultimate name. They searched far and wide, sought help from so-called expert name hunters, but they still couldn’t find the “one.” That is until they stumbled upon the fabled realm PetMag, where their destiny–and the perfect moniker–awaits…

You can’t go wrong with a cat name influenced by your passion, especially if that passion is Star Wars; phenomenal characters, unforgettable monsters, jawdropping planets – the Star Wars universe is brimming with out of this word inspiration.

Today, we’ve used the force to bring you the best Star Wars cat names out there. We’ve gathered monikers that’ll befit any feline, even those mischievous cats that have turned to the dark side. We’ve also thrown in some iconic, unforgettable quotes throughout this article to bring back all your nostalgia.

So, without further ado, let’s begin our journey at the start of it all: the Star Wars movie prequels.

The Star Wars prequels are made up of Episode 1: The Phantom Menace (1999), Episode II: Attack of the Clones (2002), and Episode III: Revenge of the Sith (2005). They tell the story of Anakin Skywalker’s fall from a promising Jedi to Sith Lord Darth Vader. 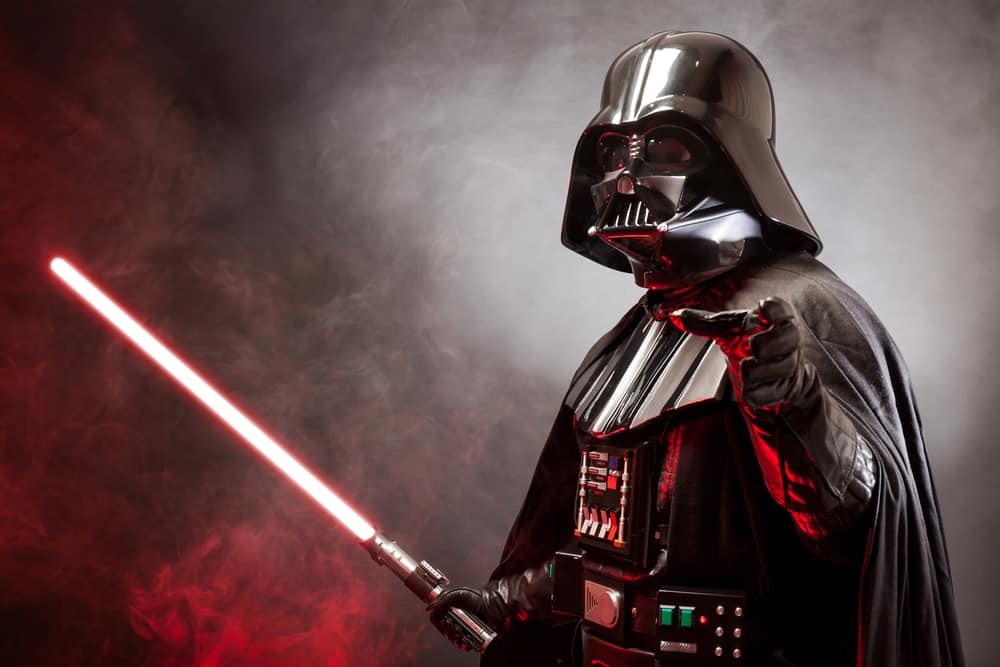 The Star Wars original trilogy is made up of Episode IV: A New Hope (1977), Episode V: The Empire Strikes Back (1980), and Episode VI: Return of the Jedi (1983). The story revolves around Luke Skywalker’s journey to become a Jedi and the conflict between the Rebel Alliance and the Galactic Empire.

These iconic movies are not just considered some of the greatest in the history of film – they also brought the sci-fi genre into the mainstream.

The latest movies in the franchise, Episode VII: The Force Awakens (2015), Episode VIII: The Last Jedi (2017), and Episode IX: The Rise of Skywalker (2019), focus on the battle between the Resistance and the First Order, as well as Rey’s quest to learn the ways of the Jedi.

From Solo: A Star Wars Story (2018) to The Mandalorian (2019), there have been plenty of spin-off Star Wars movies and series. Of course, new content means new and exciting characters to name your feline after!

Rogue One: A Star Wars Story

From the odds-defying Battle of Endor to the Battle of Hoth led by the unforgettable Darth Vader, there are tons of epic battles that have changed the course of galactic history. So if your feline’s badass nature is of battlefield magnitude, pay homage to them by naming them after one of the most famous Star Wars battles ever fought.

Your furbaby probably won’t be mastering a lightsaber any time soon, but if they seem to possess an otherworldly, force-like power that makes you give in to all their wants, a Star Wars cat name couldn’t be more apt.

Whether your feline is as feisty as a Sith or as kind-hearted as a Jedi, there are tons of fun Star Wars-inspired names to choose from. In doing so, you’ll also be paying homage to your love for the galactic franchise.

When picking out a name for your furbaby, make sure it’s a name that you’re not afraid to say aloud. Naming your extra-fluffy kitten “Darth Vader” might be hilarious in the comfort of your home; it might become utterly embarrassing at a veterinarian’s office if you’re not exactly open with your love for Star Wars.

May the force be with you. Always.

Cat Names From Movies for Your Famous Feline