Native American naming traditions are very different to those of western culture. Most westerners give their children names that they like, names of relatives, or even names from famous television shows (yes, people are naming their children Khaleesi). For the most part, westerners keep their birth names for life, with only a few deciding to use legal means to change their names.

For Native Americans, though, names are not static. Oftentimes, names are given to describe a person, so a child’s name can change if it does not fit their personality. Even adults can earn new names based on their disposition, achievements, or struggles.

Although you’ll be considering a Native American name for your dog, we wouldn’t recommend that you follow tradition and change your dog’s name throughout the course of its life. It is possible to change a dog’s name, but it’s definitely better if you don’t have to.

Still, if you’re choosing a Native American name, it’s good to have a better understanding of the culture so that you can do so respectfully. If you’d like to honor Native American naming traditions, try picking a name that describes your dog in some way.

Also, some tribes have more than one language or dialect. We were able to provide which tribe a name has hailed from, but not always which exact language.

If your first language is English and you don’t speak any Native languages, then you may have trouble pronouncing some of these names. We suggest you do further research on the names you like in order to find the proper pronunciation.

The Cherokee Nation’s website has a handy tool that allows you to search English words and see their translation into the Cherokee language as well as hear their pronunciation. Similarly, the Nez Perce tribe has information on how to pronounce their Nimipuutimt language. 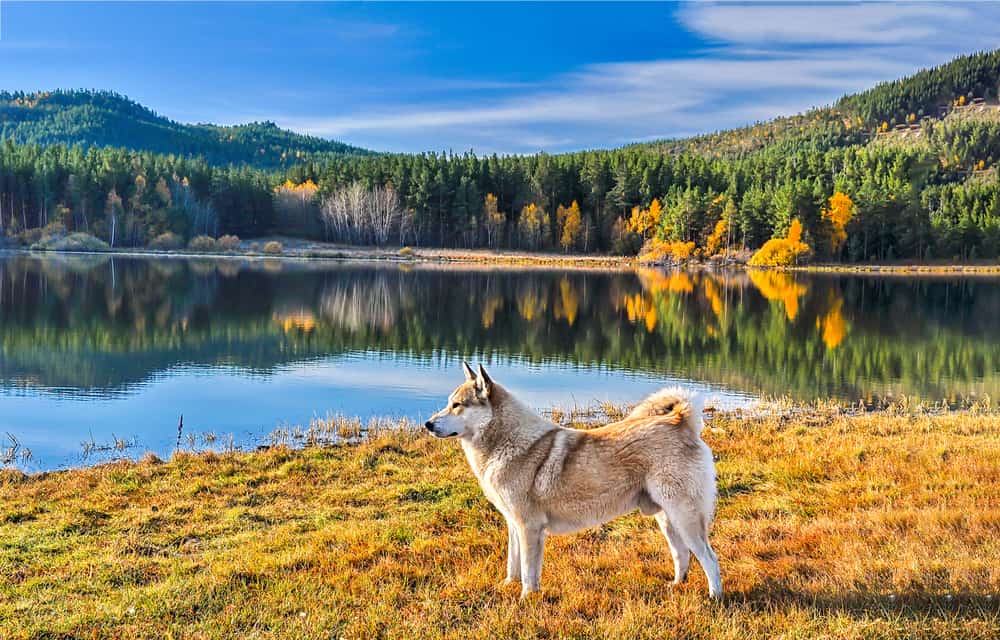 While it is true that Native American cultures often respect and revere nature, we can all find a sense of wonder when witnessing its beauty and vastness. Not only that, but spending time outdoors can actually have a positive effect on one’s mental health.

If you’d like to honor nature, consider giving your dog one of these nature-inspired Native American names.

To some, it may seem silly to name an animal after another animal. However, it’s not all that uncommon to name a dog something like Buck or Bear. Here are some Native American names that follow suit.

As we explained before, Native Americans use names to describe the person the name belongs to. Therefore, having a name that has to do with strength would mean that person fits that description. We think dogs are some of the strongest creatures out there.

They’re able to quickly adapt to almost any situation, and in terms of physical strength, they have powerful jaws! Not only that, there are a number of dogs who are surprisingly strong for their size, as well as dogs that could easily pull their owners over.

It goes without saying that dogs are adorable. They will never not be adorable. As such, cute names are always an appropriate choice. These are some of our favorite cute Native American names.

Though dogs can’t see as many colors as we can, it’s a myth that they see in black and white. In fact, they can see shades of blue and yellow, though they are unable to see red, purple, or orange. Why not name your dog after your favorite color?

We’ve already shared a number of wonderful Native American names for dogs. Here are some names for male dogs that don’t fit any specific themes but are still lovely.

Here are some beautiful names for female dogs with equally lovely meanings.

If you’d like to name your pup after one of these figures, we suggest you research them more deeply in order to truly honor their lives.

Describing Your Dog With a Native American Name

Even then, the change of last name traditionally applies to females only (though in an effort to move away from patriarchalism, some couples create new last names or combine their last names upon marrying).

Personally, we love this Native American tradition. After all, who doesn’t grow and change as they age? It takes time for a baby to grow up and show us its personality, and the same is true of puppies. Unfortunately, it’s not realistic to change a dog’s name even if its name no longer suits the dog’s personality after it grows up.

Still, that doesn’t mean you can’t find a lovely Native American name for your dog. If you’d like to stay true to Native American traditions, you can try to choose a name that will likely describe your dog for its whole life. Our favorites are Nikan, meaning “my friend,” and Nuttah, meaning “my heart.” For your dog will always be your best friend and live in your heart until the day you pass from this world.